With New Laws and Some Help, Iraq Turned Around Anti-Money-Laundering Problems

Seven years ago, Iraq’s financial system was beset by problems.

An estimated $800 million in U.S. currency was illegally flowing out of Iraq every week, Iraqi auditors told American investigators at the time. And the central bank governor was dismissed after corruption had become institutionalized within the country’s government and political system.

Since then, however, the country’s efforts to combat illicit finance have improved, and international watchdogs have taken notice.

Cleaning up corruption in Iraq has been the central bank’s biggest priority since he came in 2014, Ali Mohsen Ismail Al-Alaq, the current Iraqi central bank governor, said in an interview. His efforts, combined with input from the country’s leaders and U.S. and international experts, have started to pay off.

“This earned us respect from international organizations and opened opportunities for global financial institutions to come in,” Mr. Al-Alaq said.

“This was important to give us the way to deal with the problems we had at that time,” Mr. Al-Alaq said. The effort established the infrastructure needed to support the country’s anti-money-laundering and counter-terrorism-financing efforts, he said.

Iraq had an unstructured banking system after the invasion and dealt with a lack of capacity to combat money laundering, said Ayham Kamel, head of the Middle East and North Africa practice at the Eurasia Group, a political risk consultancy.

“Now, things are significantly improved and the government is in a place where it seeks to preserve the integrity and the safety of the Iraqi financial sector,” he said. “It will continue to adjust its regulations and procedures to ensure compliance with the broad standards of the international and financial community.”

Money-laundering convictions in Iraq rose dramatically, according to a 2017 U.S. State Department report.

In June, the Financial Action Task Force, a Paris-based international watchdog, took the country off its list of countries failing to tackle money laundering. 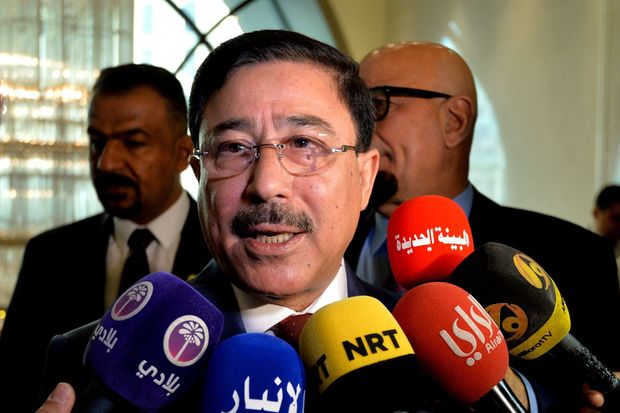 “Iraq has been dealing with some big problems over the years,” said John Sullivan, a former U.S. Treasury Department attaché to Iraq who now is a director with consultancy Financial Integrity Network.

“The government did a good job to get people to focus on what they needed to do under the FATF plan,” he said. They really have made progress against money laundering, Mr. Sullivan added, crediting Mr. Al-Alaq for the effort.

The central bank still has work to do, as does the country’s leadership. The country ranks 168th out of 180, tied with Venezuela, on the latest edition of the Corruption Perceptions Index, produced by antigraft group Transparency International.

The next round of evaluations from the FATF will focus on Iraq’s anti-money-laundering effectiveness, rather than merely passing the right laws and establishing the recommended controls, Mr. Sullivan said.

“They need to implement and understand the regulations they put into place, using the lessons learned on counter-terrorism financing to address the larger problem, which is money laundering linked to crime and corruption,” he said.

It is the top security issue in Iraq today, Mr. Sullivan said. “It’s at the point where it’s crippling the entire country,” he said.

Iraqi banks are getting better at learning the letter of the law, he said, but the country needs a lot of human development in the anti-money-laundering area.

Mr. Al-Alaq said Iraqi banks are submitting cases of money laundering to the courts, and that the central bank has withdrawn licenses from exchange houses caught moving money illicitly.

“Those tools are working and they’re generating results,” he said.

The corruption problems are holding back Iraqi lenders from joining the international banking community, said Walid Raad, a partner at EY. Developing correspondent banking relationships across the globe will depend on strengthening the country’s defenses against corruption.

The central bank is at the heart of that effort, Mr. Raad said, because it has the ultimate responsibility for supervising the country’s anti-money-laundering programs.

There were “very limited” correspondent relationships for domestic Iraqi banks in years past, but “now we see a long list” of them, he said, declining to give a number.

“It’s totally different than before,” Mr. Al-Alaq said. “…Banks outside the country are starting to do business with them.”